The Ghostwriter’s Tale: How Target Reader feedback changed a memoir for the better

Andrew Shaughnessy2022-06-14T19:15:39+00:00June 13, 2022|
Matthew Marsocci is a ghostwriter—one of those rare wordsmiths who hires out their pen to write books under another’s name. Many ghostwriters have specialties, with some focusing on political speeches, others on marketing content or fiction. As for Marsocci, he specializes in memoirs—working with clients to craft dramatic, engaging stories about their lives.

At its best, the process is a true partnership: On one side you have an individual who has done something spectacular or lived a remarkable life, but who may be a terrible writer and not know the first thing about how to turn their experiences into a story that people would actually want to read. On the other side you have a talented writer, a master of storycraft adept at using interviews to pull out the details that make for a good story, identifying compelling narrative threads and themes, and using their skill with words to turn the deluge of data and anecdotes into a book with coherent plot, characters, and mass appeal.

Over the years, Marsocci has traveled the world to tell the stories of world class athletes and media icons, chess prodigies, physicians, and even terrorists. And though, by the very nature of his job, he lives and works behind the scenes, his writing has even landed his books on the New York Times Bestseller list.

Still, despite his expertise and success, collaboration can prove challenging. After all, a memoir is a very personal thing. And sometimes an author—particularly the sort of person who is successful or powerful enough to be commissioning a memoir in the first place—will want to control the narrative and details of a book to such a degree that they butt heads with their ghostwriter. The author has their own vision of what parts of their story they want told or emphasized, what accomplishments they want to discuss or focus on, or even what message they want to send. Meanwhile, part of a ghostwriter’s job is to walk the fine line between helping their client communicate what they want to communicate and ensuring that the result is actually a compelling story.

Recently, Marsocci was stuck on a particularly tough memoir.

“We had a real issue with the author,” he explained. “We got the first draft done with everything ready to go, and he rewrote a whole chunk at the end. I’d never had that happen before.”

As Marsocci struggled to convince the author to see his point of view regarding some key manuscript edits, he and the author submitted their manuscript to TAI for feedback from real readers in their target market. The insights gained through the Target Reader Manuscript Analysis (TRMA) changed everything.

“The feedback was great,” Marsocci said. “It did exactly what we needed it to do, and it felt really authentic, really genuine.” 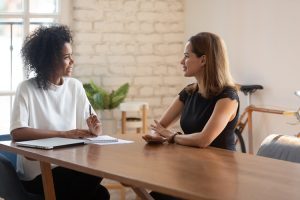 Overall, readers loved the book. They enjoyed the writing style, praised the narrative structure and flow, and found the author’s story inspiring. Simultaneously, readers identified a number of key areas for improvement. And, unlike Marsocci, the readers didn’t have to be quite so careful with their criticism.

“The report was pretty honest in terms of talking about some of the failings of the manuscript which I had previously brought up with the author,” Marsocci said.

In the memoir, the author recounts rising from an impoverished background and pursuing his dreams against the odds. Readers were enthralled by the author’s rags-to-riches narrative, which several readers described as a “coming of age story.” But once the story reached the point where the author had “made it” in the latter chapters, there was a clear, sharp drop off in reader interest. In short: The conflict was gone, and readers’ attention fled with it.

“That phrase ‘coming of age story’ was one that we’d never used when we’d been talking about the book,” Marsocci said. “When I saw that I thought, ‘Yeah, that’s exactly right. That’s exactly what it should be.’”

Amidst other constructive criticism and actionable insights, reader feedback put words to the narrative that informed the story’s shape. Where previously Marsocci had simply been telling the author, “This part you rewrote at the end doesn’t work well,” he now had language to explain why it didn’t work and market research data to back him up. At first, Marsocci was afraid that the author would take the feedback poorly, being offended by or angry at the criticism. Instead, the reader feedback acted as a buffer between the ghostwriter and the author, helping soften the blow and drive the point home.

“We made major revisions to the final section as a result of this report,” Marsocci said. “The manuscript is definitely better now. We had a call afterwards with the editor and author, and the author was SUPER happy with the TRMA. He thought it was incredibly helpful and really valuable, and he was just really pleased that he got it.”

“The TRMA allows the author and the editor to make informed decisions,” he added. It was so helpful to have, because these are the kinds of issues that you could end up seeing on an Amazon review and get completely blindsided. [Target reader feedback] turned around a project that was really getting me down. I’ve been telling my wife for the last few months: ‘I just want to get this over the line. I just want to get this done.’ And based on these changes, as of Monday we should pretty much be there.”

Learn more about how a Target Reader Manuscript Analysis can help you identify and address your book’s weaknesses and amplify its strengths.

About the Author: Andrew Shaughnessy

Andrew has been a professional writer, editor, and analyst for more than a decade. He cut his teeth doing freelance journalism for local magazines, then spent four years living and working overseas, writing for international non-profits in South Sudan, Uganda, and India. After returning to the United States in 2016, Andrew split his time between serving as staff writer for a global non-profit operating in 102 countries and continually growing his freelance writing, editing, and analysis career to include long-form narrative journalism for national and international magazines, crafting analytic market trends and impact reports for global corporations and INGOs, and spearheading manuscript analysis for Target Audience Insights. Equally nerdy about data-driven analysis and the beauty of the written word, Andrew loves helping authors and content creators hone their work to move hearts, change minds, and capture audience attention. When he’s not hard at work as TAI’s director of editorial analysis and resident paragraph architect, you can usually find Andrew with his nose in a book or off adventuring (running/climbing/biking/skiing) in the Pacific Northwest’s gorgeous mountains.